Tripawds Supporter sites have no ads!
Skip to content

Boone has a way of making me smile 🙂

Today’s smiles actually started last night, when he picked up a Nylabone and figured out how to brace it between his paw and a pillow so he could chew on it for a while.

And he slept through the night! Wahoo! I knew he was in a deep sleep when I heard moose moving through the yard around 1AM but he didn’t. I did hear him making his routine house patrol at 3:30 this morning so I got up and encouraged him back into our room and onto his makeshift bolster bed where he slept ’til breakfast. He still seems to prefer the floor or the thinner bed (which we surrounded on two sides with pillows) over the orthopedic bed.

This morning he cleaned his breakfast bowl, hopped his way outside, then came back in for his morning nap (which technically extends the entire day). 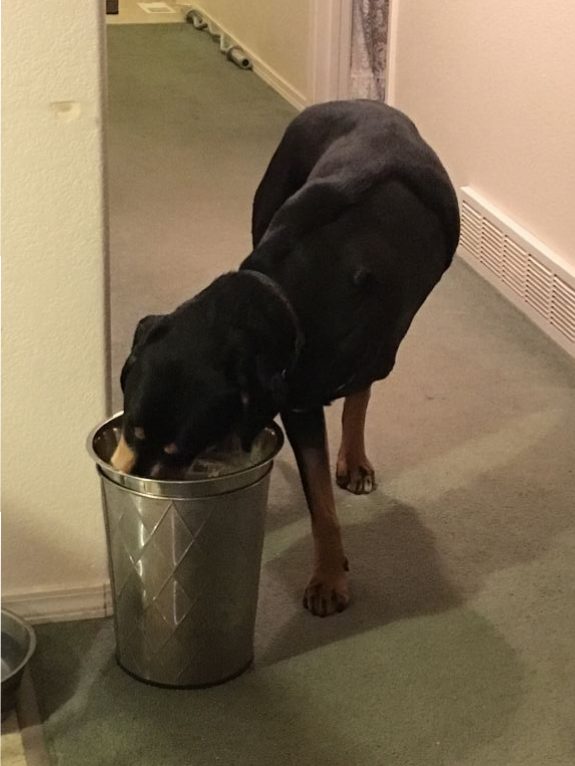 But he put the biggest smile on my face when his propeller tail wag returned! I was just about in happy tears. It’s been MIA for some time.

He also became my unofficial office assistant again today. Here he is making sure there are no documents to be shredded (a job he takes very seriously, but you wouldn’t know it in this pic). 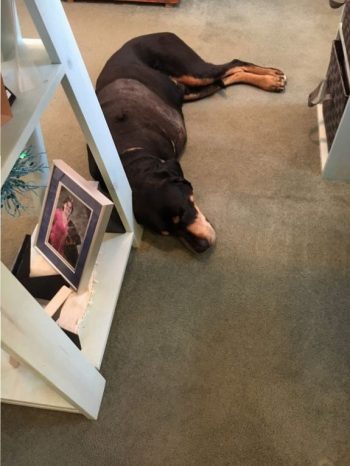 Life in TriPawd Boone’s world is coming together 🙂


To remove ads from your site and others, upgrade to a Tripawds Supporter blog!

Today is Boone’s 5th day as a TriPawd and he spent most of it sleeping.

We were blessed with a beautiful, sunny day so I opened the blinds and let Boone soak up some winter rays. 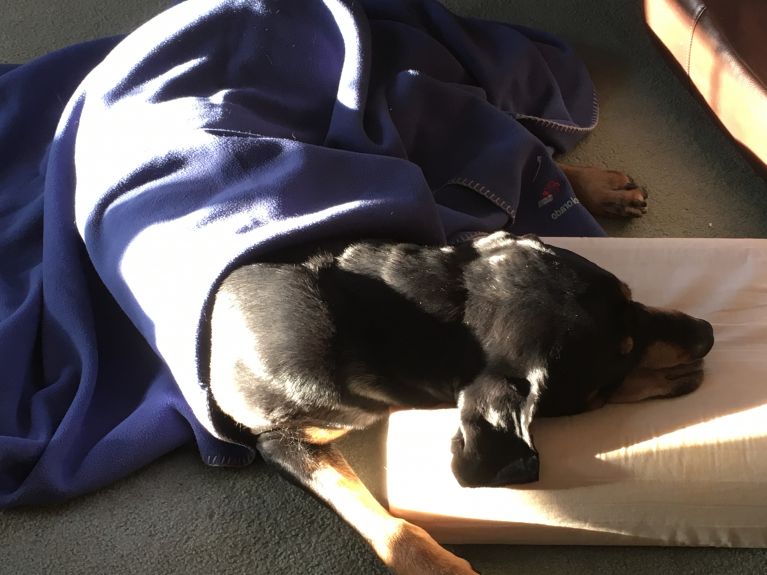 His appetite was healthy today, eating nearly a regular amount of breakfast and dinner. He’s figured out the stairs to go to his yard and finally found his balance to potty 👏🏻

And after dinner tonight, he found his favorite spot again, right next to dad for some scratches and belly rubs. 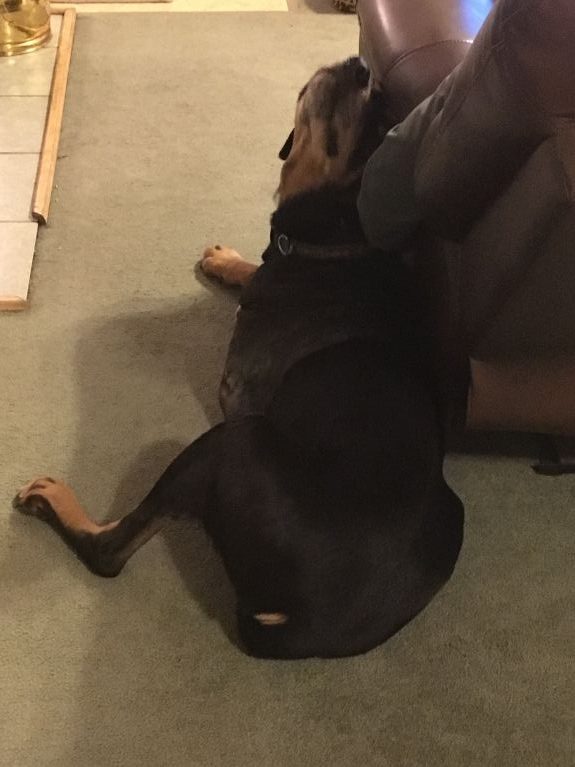 His amp area is much less red and angry-looking today. He’s still not keen on the cold compresses.  But he falls asleep with the warm compresses.

Hoping for a restful night for all of us and am looking forward to what tomorrow brings!

Today was one of those “one step forward, two steps back” kind of days for Boone.

Our one step forward was that he FINALLY 💩. I know, little things make me happy. I think my friend and I let out a little cheer on our morning walk when my hubby texted me that emoji.

Our two steps back started when he only picked at his breakfast. Granted this was before our one step forward event. I probably wouldn’t want to eat if I hadn’t, well, you know, since Wednesday either.

During his morning cold compress session I noticed some redness and bruising not close to the amp site which worried me. Then I found another spot in another area and the neurotic side of me decided we needed to see the vet.

So, off we went. And it turned out all the redness and bruising was pretty much normal (I probably should have waited to hear from the fabulous TriPwawd community before subjecting Boone to a trip to his least favorite place).

He’s been pretty quiet all day and I have to keep reminding myself, and listening to those who’ve gone before us in his TriPawd journey, that it’s only 4 days post-amp. A major surgery.

We did start cold/warm compress sessions to help move some of the fluid. Thankfully my mom is an amazing seamstress so I have plenty of dog friendly rice and corn packs to help with this. 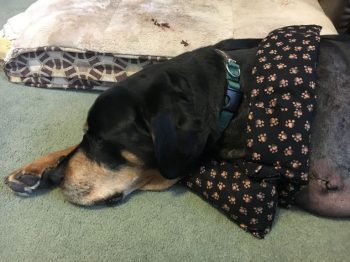 We’re getting another beautiful blanket of snow today so I hope to get some pics of Boone outside tomorrow.

Right now he just wants to sleep by the woodstove. 💖🐾

Boone is adjusting nicely to living as a TriPawd and we’re beginning to see glimpses of the “bad dog bundle” returning already on day 2.

He’s learning to navigate through the house, is figuring out the slow hop to laying down position and is a pro at taking the three stairs out to the back yard. I still have to help him coming up the stairs although I think he’d gladly attempt it on his own – I just don’t want to risk a fall.

Figuring out which leg he can safely lift to pee is proving to be a learning curve for him. I have to make sure I’m there to steady him if he goes off balance. Which he does. But he’s such a trooper.

Here he is today, after a failed attempt to get on the couch (I stopped him then placed one of the terrifying baby gates in front of it to discourage another attempt). 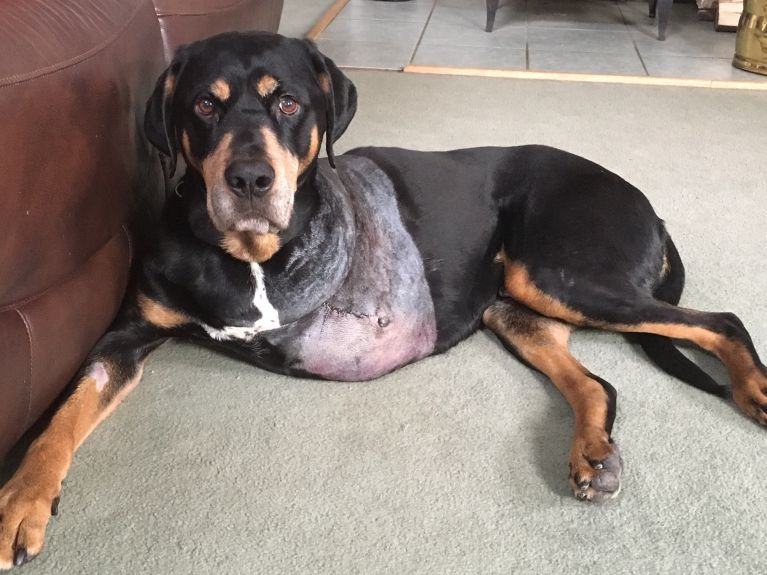 Last night was a very restless, sleepless night. Boone couldn’t seem to get comfortable and refused to sleep on any of his 3 beds. After getting up a couple of times to check on him I finally decided it would just be easier for me to sleep on one of his beds in the living room to try and comfort him. Good thing I’m “vertically challenged.” Boone continued to squeak most of the night but I don’t think it was an “I’m in pain” squeak. He happily accepted a few Yummy Chummies and eventually settled in.

His appetite is returning. This morning he ate an almost normal breakfast as well as apple slices for treats. He isn’t quite at the counter begging for them yet, but I’m sure he will be soon.

And he “found his tail” again 🙂 I hadn’t seen him wag it so hard in a while.

This afternoon he picked up a Nylabone and got about the business of figuring out how to hold it with one paw while chewing. He’ll get there. 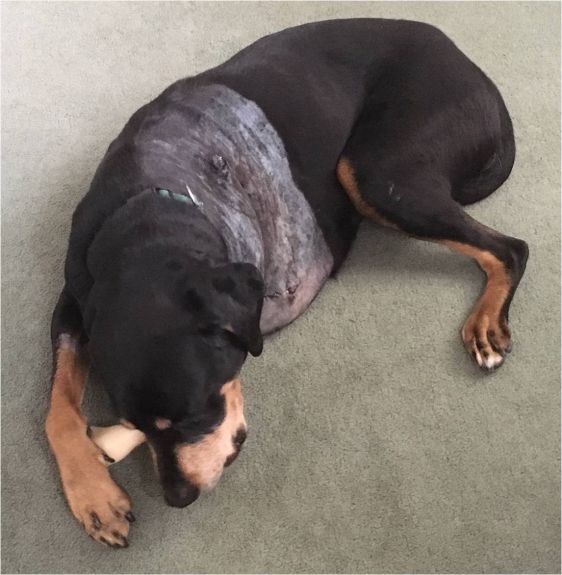 All in all, I think he’s progressing as he should. The incision area looks good, no drainage, and the redness is slowly fading. Boone is a really deep chested dog so I have to figure out a fleece or other soft band to place along his underside if he continues to insist on sleeping on the floor instead of a bed. I’m sure if he could talk he’d tell me the bed problem would be solved if I’d just move the baby gate away from the couch.

That’s all from Boone’s world today. I hope to get better pictures of him outside once he decides he can go out during daylight hours ;-).

PS – I uploaded some of my favorite Boone pics on a new page if you’d like to see what a character he is. Scroll back up to the top and look for Favorite Boone Pics in the menu.

Add an excerpt to your posts to provide a summary for readers in many blog themes! 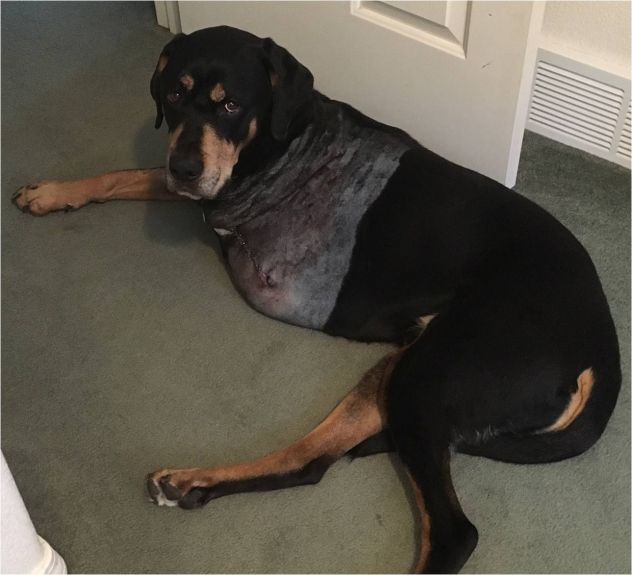 Today is Boone’s first day as a TriPawd and he’s doing so well considering all he’s been through.

I was a bit amazed when the vet at the 24-hour clinic where Boone spent last night called me at 6:15 this morning to let me know he had already gone out 3 times and needed very little assistance getting up and moving around.

I’m not sure what I was expecting, but Boone has always been an overachiever ;-).

Today has been a resting day. Lots of hugs and Yummy Chummies and being thankful that Boone’s painful leg is now a distant memory.

We’ll take this journey one day at a time, making sure Boone is happy, pain-free, and back to being his “bad dog bundle” self as soon as he can!

Bad to the (TriPawd) Boone is brought to you by Tripawds.
HOME » NEWS » BLOGS » FORUMS » CHAT » YOUR PRIVACY » RANDOM BLOG